The second coming of the Malawi customer for HF120W

On June 3, 2015 ,the young people who come from Malawi Jackson, with the trust to HANFA and demand for drilling rig, he came to HANFA once again.
At five o 'clock in the afternoon of June 3rd, HANFA salesman Linda met him at the airport, compare with the first time he come to China, he looks obvious confidence this time.Yes, familiar city, familiar person, familiar product, let him feel everything is so strong and confident.
This coming to HANFA ,Jackson's main task is to negotiations continue to order HF120W relevant matters.On May 6, 2014, Jackson came to China first time, in HANFA GROUP, then he looked a little nervous, you can see that he feel sense of uncertainty on around from his eyes.However, after he look over the overseas Marketing Department, factory, machine (HF120W), he finally decided to bring HF120W back .Later, after HANFA business person communication with Jackson,we just know that ,actually ,even he decide to buy the machine,he also was not sure of the quality.But after a year of use, he believed, for such a long time the machine does not have the repair,simple and convenient operation, fully meets the requirements of their work. I think, this is the reason of his second trip to HANFA. 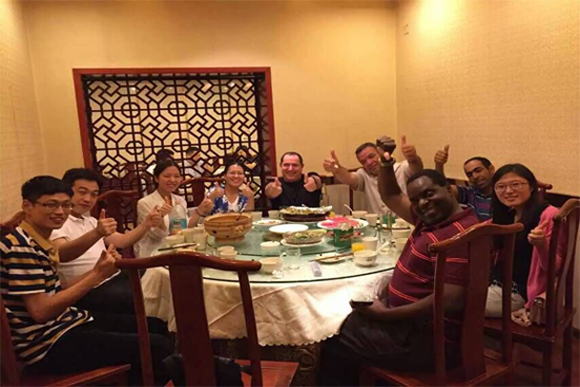 The negotiations went smoothly, and happy, humorous Jackson often make the people around us laugha during the negotiations and dining , all like him very much, in addition to the relations of business and customer cooperation, we also established a deep friendship with him.
Предыдущий: HANFA general manager take part in Central Asia (Kazakhstan) China Industry Brand Fair
Следующий: